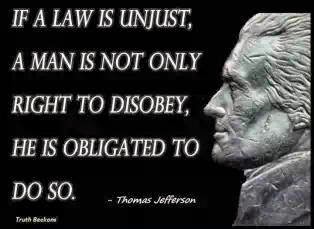 If the people continue to follow unjust legislation that runs contrary to or breaks natural law for a sustained duration of time they invite tyranny and will ultimately bring about their own demise and endanger the freedoms of future of generations.

This has happened repeatedly thru history with the end result being the untold suffering and death of millions.

Tho' i believe this is primarily a spiritual battle the forces of darkness that oppose us have a government in this world thru which they exercise their authority.....it is evidenced by the passing of legislation that breaks natural Laws and seeks to remove inalienable rights given to us by our creator.
Those thinking of taking a neutral position in the face of whats coming and of injustice are taking the side of the oppressors and are some of the most irresponsible people in society!