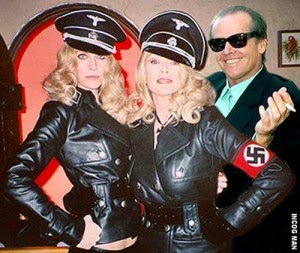 Sourced from this article by Robert Fisk and presented with pictures, captions and  satirical comments by Silly Milly.

Is it time to round up the 4 million Canadians suffering from the mental disease known as “anti-Semitism” and put them in concentration camps run by B’nai Brith Canada?


SILLY MILLY ASKS: Is this your average Canadian citizen now? (pictured) Doesn’t he look scary? Hey, what we gonna do about guys like this, eh?
Robert Fisk writes:
Not long ago, I was handed the most outrageous, vile, dishonest and slanderous calumny uttered against the people of Canada. It was contained in a full-page advertisement in the National Post (founder, Conrad Black), a newspaper handed out – free, I’m happy to say – on my Air France flight out of Toronto.
Here is the headline:

Almost 4 million Canadians
are afflicted by this disease!

Beneath this title is a half-page, very blurred and uncaptioned colour photo of a large crowd – they could be football supporters, rush-hour commuters in Vancouver, you name it; they are mostly white males but include women and with at least one dark-skinned man close to the camera.
Beneath the picture, this incredible ad continues:

“Left unchecked, it [the disease] can result in violence tendencies. Many times, those infected haven’t been diagnosed and may pass it on to their children, grandchildren, colleagues or friends. Please help stop the spread of this disease before it contaminates your community.”

For the “disease” afflicting “almost 4 million Canadians” is “anti-Semitism”. And this disgusting advertisement – published without comment by one of Canada’s leading right-wing newspapers – was produced by B’nai Brith Canada and the “Jewish Christian Alliance”.

“At the first sign of anti-Semitism,” this appalling ad concludes, “call the B’nai Brith Canada Anti-Hate Hotline…”
In other words, this pro-Israeli Jewish group – whose exaggerations and hateful propaganda have been rightly condemned by Jewish Canadians – claims that four million of their fellow-countrymen and women are sick, racist neo-Nazis.
What other conclusion are we supposed to draw if almost 9 per cent of the Canadian population is “diseased”, “infected” and “contaminated”?
SILLY MILLY SAYS: If almost one in ten Canadians is like this, they ought to be shot! We should have a policy of zero tolerance toward swastika bearing gals like this who are giving Canada a bad name! There’s something distinctly DEPRAVED about this picture, know what I mean? The guy in the black shades, grinning away like a goddamn maniac and openly promoting lung cancer by smoking a fag in public, definitely deserves to die. Anyway, that’s what Silly Milly thinks. And she could be right! LOL.
Now let’s forget that B’nai Brith regards any criticism of the state of Israel – however justified, however mild, made by Jews and non-Jews alike – as anti-Semitic. Let’s forget previous protests by Jewish Americans against the organisation’s grotesque exaggerations. Let’s even ignore its equation of Palestinians with Nazis, a comparison that led it to publish a bowdlerised version of the infamous photograph of the wartime Grand Mufti of Jerusalem meeting with Hitler – the Nazi dictator was “moved” in the B’nai Brith version of the snapshot about three feet closer to the Palestinian so that Hitler appears to be almost sitting on his visitor’s lap.

OK, Hitler’s not exactly sitting ON this Arab guy’s lap, not YET, but you can see he’s planning his move by his shifty eyes and the diabolical expression on his face! And the grand mufti has his eyes shut, like he’s praying to Allah for help!

Here, check out the evil pic for yourself!

And let’s not ask why the Canadian Prime Minister, Stephen Harper, did not immediately leap to the defence of his own Canadian people when confronted by this disgusting statement of “disease”. For alas, Harper told the Israeli Knesset last January – while archly claiming “criticism of Israeli policy is not in and of itself necessarily (sic) anti-Semitic” – that condemnation of Israeli policies amounted to anti-Semitism. This included those who supported the boycott campaign against Israel or referred to it as an apartheid state.
“On some campuses,” said Harper, “intellectualised (sic) arguments against Israeli policies thinly mask the underlying realities, such as the shunning of Israeli academics and the harassment of Jewish students.”
“Sickening,” Harper called this. Yes, the Canadian Prime Minister himself was using the “disease” metaphor employed by B’nai Brith. And why not? Because there’s another reason Canadians can expect no protection from their own Prime Minister, who in his speech might have been a member of the Knesset rather than a guest of its members: Stephen Harper was awarded the “International Presidential Gold Medal” for “his commitment to the Jewish people and the State of Israel” in 2008 – by B’nai Brith.
But what, we have to ask, possesses Israel’s “friends” to publish this pernicious material about 4 million “diseased” Canadians? Does B’nai Brith Canada not realise that these very same despicable lies were used by the Nazis in their hate propaganda against the Jews of Europe?
In Hitler’s Germany, Jews were described as microbes. Jews, according to Julius Streicher, were “the carriers of disease and vermin among men”. In August 1941, Goebbels called Jews “the carriers of infectious diseases” and two weeks later referred to Jews as “parasites”. By November, he was calling them “lice”.

SILLY MILLY SAYS: Calling them Jews “lice” is extremely offensive. Comparing  them to “parasites”, “carriers of disease” and “vermin” is even worse and proves that this Mr Gobbles must have been a very wicked man. He ought to have been shot! . . . Ooops, actually he WAS shot! He shot himself!!! In a bunker. With Adolf Hitler some time in 1945. Though what he was doing in a bunker, playing his last game of golf with Adolf, is a mystery to me! LOL.

But now, 4 million Canadians carry “disease”. Undiagnosed “infections” will be passed on to children and grandchildren. The “community” is in danger of being “contaminated”. If this stuff was not so revolting, it could be laughed off. It’s not just a question of how Stephen Harper can tolerate this garbage. How can Canadians?
And – here I draw only on my own experience of visiting Israel itself dozens of times – how on earth can Israel tolerate this filth from B’nai Brith Canada?
Disgrace is the word that comes to mind!

SILLY MILLY SAYS: Well done, Stephen! When you gonna make it a crime punishable by death for any Canadian citizen caught in possession of the Protocols of the Elders of Zion? Remember, that’s what the Commies used to do in the good old days of the Soviet Union when Comrade Lenin and Stalin were in charge! Wow, those were the days! Heads were a-rollin’ and the rivers were runnin’ with blood as the noble Cheka Jews managed to get rid of 66 million rotten anti-semitic Christians!

All this prompts two grim thoughts.
If this dangerous material published by B’nai Brith Canada is really supposed to defend Israel, then Israel must be in much greater danger than it believes.
With a Canadian outfit such as B’nai Brith and the National Post as its “friends”, Israel doesn’t need Arab enemies.

SILLY MILLY CONCLUDES: Well said, Robert Fisk! Hope you don’t mind me commenting on your brilliant article! I’m soooo glad that you and Silly Milly agree on all important points! Yep, so the sooner we do something about those darn Canadian Nazis, the better! Shoot ‘em all, I say!