All over the UK, land and businesses are being stolen because court documents are not being processed in accordance with legal protocol, nor checked for dates, stamps, validity, lawfulness – either by police, court administration, or the judiciary. The documents and court process are being manipulated in a fraudulent manner, and for the purpose of economic crime. It is highly organised. The Land Registry is complicit.

Anyone can get a rubber stamp made. Many documents do not display the court seal. Many times, documents are issued by the legal departments of local authorities, and not lawfully processed through the court, but sent directly to police and bailiffs for action. They act without checking the validity of the documents and thereby make themselves accessories (at the very least) to serious organised crime. This action includes the removal of children from family homes to feed into the two billion pound child adoption industry operating in the UK.
Document dates are manipulated, and court stamps (most likely fraudulent) appear AFTER the dirty deeds have been done. Signatures are missing, dates are completely wrong sometimes (and have obviously been added at later dates than is legal), and all is entirely activity by criminal cartels. The fact that the government does nothing about it, and many MPs refuse to take on constituency work, and select committee members often delete emails without reading them at all, shows the normalisation of deviance which is on the brink of bringing the British legal system to its knees.
Here is one case that, thankfully, was actually checked by a judge AFTER a complaint was made and the land owner had been evicted from her farm, her animals disposed of, and all her goods and chattels burned by thugs – all while being overseen by Durham Police.
Who was negligent?
Durham police and many other forces and the judiciary are party to criminal activity, either knowingly or through negligence, and there ought to be an inquiry.
The country is now in the hands of organised criminals, and nothing is being done to stop it. Ask yourself why.
.
. 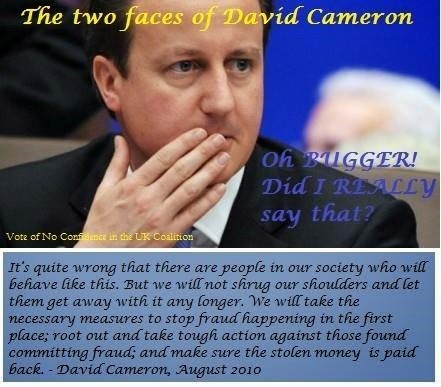 Police, MPs, ministers, the Prime Minister, Deputy Prime Minister, Secretary of State for Justice, Attorney General, and last, but not least, Britain’s Anti-Corruption Champion, Kenneth Clarke, are all regularly informed of this type of criminal activity. Are they part of it then? At the very least, there is WILFUL BLINDNESS on all of their parts. Indeed, Justice Minister and Minister for Victims, Helen Grant, most defiantly refused to investigate allegations (see her letter).
That seems to sum up the attitude of the British government towards serious economic crime. If it only affects PLEBS, they are not interested.
The situation is the same all over the country. Lives, including that of Paula Campbell (email and details below and attached), have been devastated and not one person in authority gives a damn.
Action Fraud is a waste of time and designed to take the workload off police in cases of credit card fraud, internet fraud, and similar. The National Crime Agency sits on its hands under the Home Secretary’s thumb.
Guy Taylor reported a 900,000 pound bank/property fraud to the Serious Fraud Office, which advised him that it did not fall under its remit because it was less than one million pounds. Reporting to Action Fraud was a complete waste of time. It is my opinion, that police are using Action Fraud to keep their hands clean while they continue to refuse to investigate white collar crime UNLESS COMMITTED AGAINST CORPORATIONS, THE STATE, OR POWERFUL INDIVIDUALS.
Britain is THE weak link in both the EU’s and the UN’s efforts to quell transnational serious organised crime.
Action Fraud is simply a red herring – a decoy used to let the public think that economic crimes against them are being taken seriously. Guy Taylor got no action at all from Action Fraud. He has had to launch his own private prosecution, despite the fact that the Serious Fraud Office admitted that a crime had taken place : http://www.youtube.com/watch?v=ehklozL6b90
What good does Action Fraud do for these people?
I CAN GUARANTEE YOU THAT NOT ONE PERSON IN THE BRITISH ESTABLISHMENT WILL TAKE ANY ACTION ON THESE COMPLAINTS, WHICH THOUSANDS OF PEOPLE HAVE BEEN SENDING THEM SINCE AT LEAST TWENTY YEARS AGO OR MORE. THEY ALL PROTECT EACH OTHER, AND WILL DO ANYTHING TO SILENCE WHISTLEBLOWERS AND COMPLAINANTS.
Labelling victims as Vexatious Litigants and preventing them from further court action, and attempts at mental health sectioning is usually the starting point.
Yours faithfully,
Jean James
Posted by Kevin Edwards at 20:21