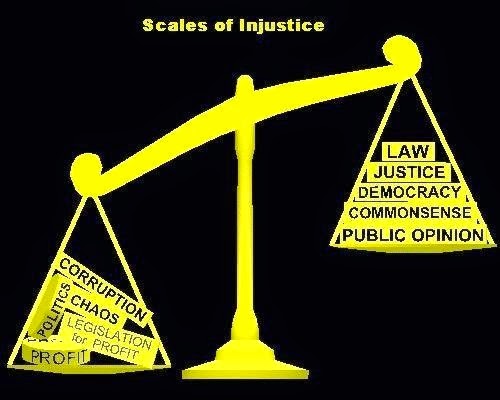 I have tried ringing you on 3 separate occasions, left messages but calls have not been returned. I have in addition been contacted by my associate Mr David Fabb of Alpa Forensics over recent correspondence between yourselves and your concerns over issues of his authority to act on my behalf, please consider this e-mail (and hard copy sent recorded delivery) as proof positive of my permission for him to act on my behalf in these matters.

I think that Mr Fabbs enthusiasm to provide yourself, (a police officer) with a general picture of the overall concerns we all have in this particular matter may be confusing you somewhat.
Talk of "complaints" and the legal profession are clearly redundant when dealing with actual prima-facie crimes committed by individuals who may also "happen" to be legal professionals (or be falsely purporting to be so as is the case of the convicted thief and benefit fraudster Michael Kidwell Horne of Kidwells solicitors Hereford)
The issue that we require you to focus your attention on is very straightforward. Myself and my family along with 4 of my grandchildren were removed from our family home of 30 years along with 20 tenants and put onto the street as displaced persons without any notice. This was done by a private company who call themselves High Court Enforcement Officers and all this was overseen and assisted by numerous (30-50) officers of west mercia constabulary (i was physically assaulted and carried from the premises).

These actions were entirely based on a claimed "court document" which i asked for and was presented with (enclosed) .

As a Private Criminal Prosecutor and student in legal forensics it was clearly obvious that this was not a legitimate statutory instrument but just a badly copied fax of a form 66 writ of possession (which was not the correct form for such procedure even if it had been legitimate) Court seal, signature. High court No, dates, are all absent, the document is fraudulent.

These issues were pointed out to all the police officers present and in particular to the officer in charge, Inspector Crumpton, upon being questioned about this document was witnessed as stating he considered this document as being legitimate and he is therefore now under full personal commercial liability in this matter.

I find it quite extraordinary that these police officers were unable (or unwilling) to identify such an obviously fraudulent document as being an actual statutory instrument and then stand back watching, indeed assisting, the removal of families along with children being unlawfully thrown into the street by agents of a private corporation.
I am now therefore serving all parties who have engaged in this action, (which was based entirely on the merits of this document) the opportunity to now contact their legal teams and to certify and attest the validity of its authenticity, and by doing so confirming the legality of their actions. Failure by the West-Mercia police to stand under or recognize the validity of this document will be taken as their acceptance it is fraudulent. (Implied admission absent a response)."For the avoidance of doubt: Failure to address these concerns reasonably and in a timely manner will be considered to be negligence on your part, as well as on the part of Inspector Crumpton. Negligence is a Common Law crime, for which you can be prosecuted - together with other crimes, such as Misconduct in Public Office - by means of a Private Criminal Prosecution."

As of today's date April 11th 2014 Hereford County Court has still failed to respond concerning the origin and validity of this document.

If neither HMCTS nor West-Mercia police are able to validate its authenticity then we will request their compliance in assisting us in investigating these matters.


As of April 7th 2014 notice was served on Hereford magistrates court for an appointment to lay a private criminal prosecution against both Barclays bank (Fraud act 2006 sec 10) and its manager Rob Mills (multiple counts) on case connected issues.

In my capacity working as a Private Criminal Prosecutor i currently have charges of burglary successfully laid against British Gas revenue officers (bailiffs) for burglary. Similarly a legally unsupported "warrant of entry" was presented which is also patently fraudulent and forms part of the prosecution evidence against the 2 defendants and will provide further charges under section 135 County Courts Act 1984,

Keep at them Guy the only response they have when they are caught out is to not reply or lose correspondence.

You'll get there mate

sorry to hear the news mate. We know this is all based on Fraud and Fraudulent Documents.

In dealing with matters of this nature, anything we Receive without a Signature may can classed as Fraud full stop.

We have the same picture in South Africa, New Zealand, Australia, Ireland, US, in fact in any Fractional Reserve System as we know.

You are obviously doing things in the correct manner, otherwise the Agents would not need to use such Force, look at it as a sign of your success. Our homes are taken even though most people on PAYE with a Mortgage are already enslaved so they cannot breathe.

You are a fantastic bloke, with you all the way.

Hi Guy.
I have a serious issue with this so called solicitor Horne. My issues are severe negligence and incompetence to which was reported to the SRA (24 counts of failure’s to abide by the SRA regulations). I have a report from St Mary’s Collage that is damning in respect to the professional services that Horne failed to provide. We suspect that Horne collapsed our case in favour of a better offer!
What I am interested in is that you say 'convicted thief and benefit fraudster Michael Kidwell Horne of Kidwells solicitors Hereford'. Can you and are you willing to elaborate on this please as it could be very helpful in another issue we have with Horne that is being considered.
I have been following your case and wish I had your ability and knowledge. My experience with Hereford Court and Kidwells (this was separate to the main case) is also one of dismay at the obvious old boy networking powers.
Bravo for taking this on and using your ability to expose the now seemingly decadent and corrupt legal system that has returned to the medieval times of being only viable for the privileged.
Martyn Bebnowicz-Harris (Harris will do)
pastandpres@gmail.com